In 2011 I was recruited for a Rewired State hack on experimental prototype applications for Honda, as part of the Honda/Guardian "Dream Factory" event.

Gareth Lloyd and I worked on designing a passive digital installation art piece called "the Corridor of Dreams". It took the form of a lightbox framed in a "thought bubble" that would automatically detect passers-by, and using some clever AI algorithms™ determine their inner hopes and desires, which would instantly be reflected within the display. 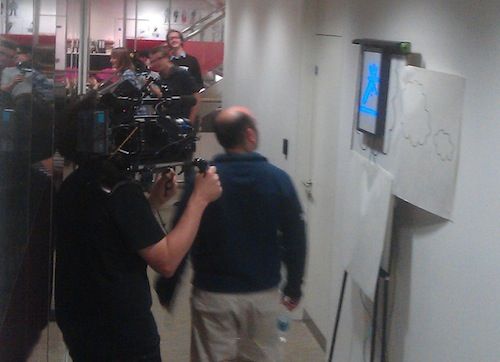 Although quite a simple idea the implementation was technically challenging. We used the LEGO NXT brick with ultrasonic sensors to detect movement (in order to trigger the event), a USB webcam to capture the image of the approaching individual, OpenCV to analyse the content of the image and an Arduino-powered “Peggy” display Gareth constructed, in order to create the dream display. This was all plumbed together using Python, and deployed on a concealed Ubuntu Nettop.

Although quite a simple and weird project prototype, it was fun to work on a creative installation that didn't need a highbrow concept and was just joyful to use.